I am continuously talking about “Transparency” and in the latest UnFuckIt Discussion I said that we are now seeing transparency, through the Main Stream Media, unlike anything we’ve ever witnessed before.  This article from The Sydney Herald is a screaming clarion of transparency, not just for Australia, but for the entire world.

Short story:  The Banks in Australia are deliberately coming up with way to push the “middle class” into poverty.

The article from the Sydney Herald entitled “New type of poverty hurting middle class” clearly outlines the gross corruption of Australia’s Major banks and their endeavor to pull as many “middle class” families into a new category of “Poverty”.  The article’s author, an emeritus professor of political economy at the University of Sydney, concludes that the regulatory system is rigged set up in such a way so that banks can continue to rip off the middle class, as opposed to making sure that the consumer is actually protected.

How did this all happen you ask?  Well….. it seems that there is no governing body that insures that Banks CAN’T rip off the public.  To quote the author, Professor Dick Bryan :

The sordid history of how this came about, stretches back 40 years, but the end result is that the royal commission into finance has revealed that poverty is no longer just about low income.  Australian banks have adopted actual lending practices for contract payments that middle income borrowers are left without enough money to pay bills and support their families because they are living in “middle class poverty”.

“This isn’t an accident: it is a strategic policy by banks. How much do banks think households need for daily living? According to the Australian Prudential Regulation Authority’s submission to the royal commission, banks “typically use the Household Expenditure Measure [a relative poverty measure] or the Henderson Poverty Index in loan calculators to estimate a borrower’s living expenses”.

So measures designed to capture the impacts of low incomes are now targeting financially-enmeshed middle-income households, and not as a statement of social shame, but as strategic objects of bank policy….

…So a decade ago, APRA (Australia’s Banking watchdog), had already publicly named the problem, in the exact same terms as it names it now. It has simply watched as the practice of using a poverty index to measure a customer’s ability to repay a loan has become normalised as a culture. A consequence of APRA neglect is that “poverty” now goes significantly up the income scale, well into what we generally call the middle class.”

The final nail in the “Middle Class” coffin?

“So who is advocating for the interests of this cohort? Not the regulators. Their mandate is to ensure that households don’t default at unexpected rates and create problems for financial institution solvency (APRA’s concern) or for wider financial stability (The RBA’s concern). The fact that people are living on the Henderson poverty line is not a concern in itself to the regulators; it only matters if they stop paying their bills.”

That, my friends is just about one of the most TRANSPARENT pieces of information on our current banking world  as we’ve ever seen.  The fact that the “middle class is being destroyed, swallowed up by debt and poverty…. and it has been done by the banks themselves, on purpose.

…. And if you think this is just an “Australian” problem, you better think again!!  I predict that this is just the first salvo of transparency that is being launched, to be followed by the US, Canada, UK, and the European Union Countries all admitting to the same outright corruption. 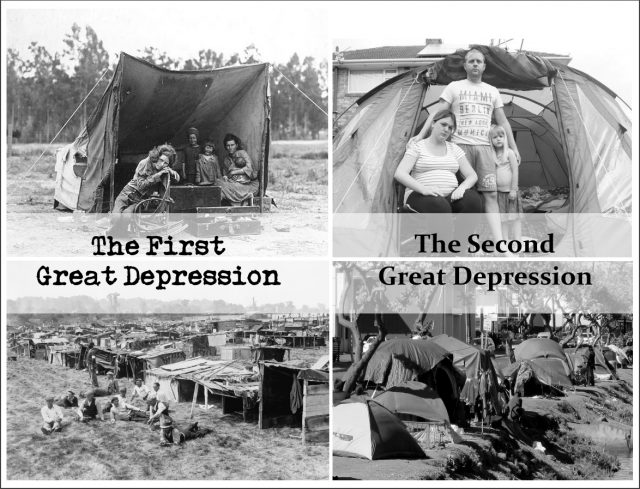