We are watching a repeat, yet again of the same template that has been used as an excuse for war over and over again.  But this time it’s slightly different and that comes in the words being used in the Main Stream Media.

Breaking news as I woke up this morning that the US, UK and France have bombed several places in Syria, using over 100 Tomahawk  missiles.  Reports from the Syrian and Russian side state that most of these missiles were shot down, but that a few  did get through and destroyed one of the targets.  Russia has, of course, responded using strong but KEY words HERE 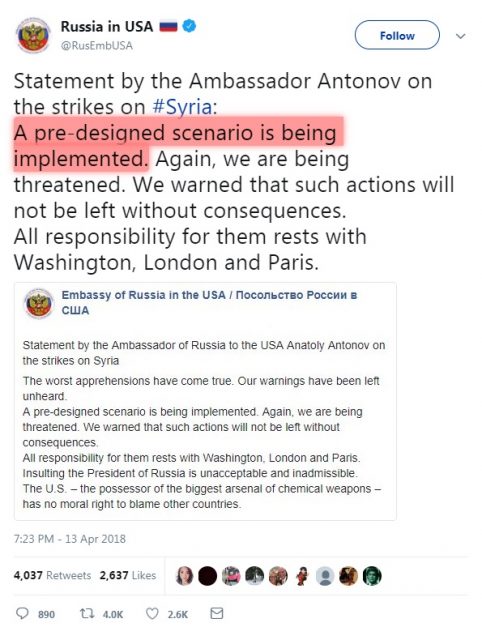 One of the most important aspect to this news, that the American and British people need to fully comprehend is that both Trump and May attacked another sovereign nation WITHOUT the authorization of their Congress or Cabinet.  Trump and May are both acting in violation of not only International Law, but of the laws of their OWN countries!  (I do not know enough about French Law to comment on the illegalities of France’s actions).

DO YOU COMPREHEND THIS?

What is interesting in the news coverage of this fucking ridiculousness, is the use of words through out the report that gives the media the opportunity to back away from this,  and to cover their asses.  The first news I read this morning came from the BBC HERE. Note the words, the non- absolute statements: 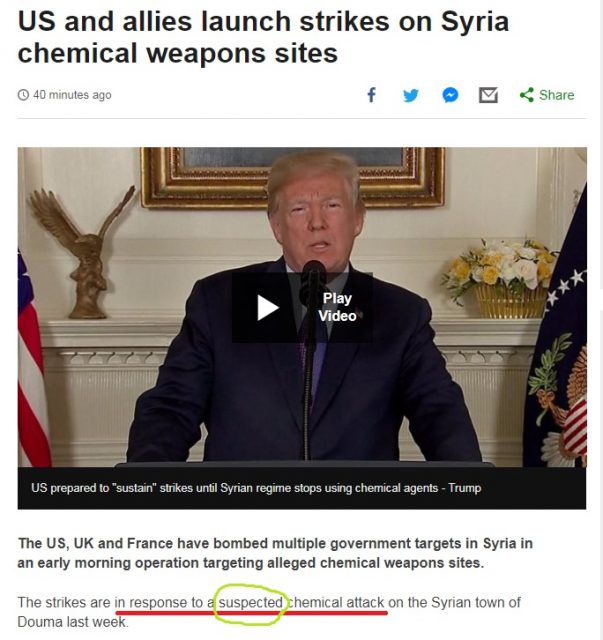 The BBC of course included the Viral Video that purported shows Syrian children being treated for “chemicals” used in the supposed “Attack”… but again, note the description used on the video:

The statements being made at the moment are very interesting, not only in their choice of words but in the fact that we are seeing officials already making statements that are not in support of this missile attack.  From ABC News:

The United Nations Secretary-General says he is closely watching reports related to the airstrikes on Syria conducted by the U.S., France and Britain.
Antonio Guterres says in a statement on Saturday that countries are obligated to act within the guidelines of the Charter of the United Nations and “international law in general.”
The United States, France and Britain launched military strikes in Syria to punish President Bashar Assad for an apparent chemical attack against civilians and to deter him from doing it again

A top Russian lawmaker says Moscow’s response to Western airstrikes on Syria must be carefully considered.

“Emotion is not what’s needed now, but professional assessment by military specialists working on the scene,” Konstantin Kosachev, head of the foreign affairs committee of the upper house of parliament, said Saturday, according to state news agency RIA-Novosti.

However, Kosachev said, the attack’s meaning was clear: “It’s a scandalous violation of international law and this is an attack on a sovereign state without an underlying basis.”

Kosachev reiterated the view of other lawmakers that the attack’s intent was to interfere with international investigators who want to probe whether a chemical weapons attack took place in the town of Douma last week.

What’s this? They want to interfere with the International Investigation of whether a Chemical weapons attack even took place?!?  Yes… today was to be the day that the investigation into this supposed “chemical attack” was to begin on the ground in Syria- From the BBC Report:

The Organisation for the Prohibition of Chemical Weapons (OPCW) has dispatched a fact-finding mission to the site of the alleged attack in Syria. Investigators were due to start their probe later on Saturday.

Yesterday Mattis announced that the Pentagon had no “Proof” of this “chemical attack”:

One of the interesting statements that came out of this mess this morning was that the Syrian Military shot down a significant number of missiles using what amounts to ancient technology (ABC report):

However, it noted that the missiles were taken down by decades-old systems, including Neva surface-to-air missiles that were designed in the 1950s. Specifying the age of the systems appeared to be a slap at President Donald Trump who had boasted on Twitter that missiles used against Syria would “nice, new and smart.”

Another interesting statement to be made this morning is that this, apparently, was a one strike attack by the US:

…. Sooooooo….. What?  Did they just have a massive over supply of missiles that they needed to use up before the end of this years Budget in September 2018?  They Did the exactly same thing in 2017- threw a shitload of missiles after a purported “Chemical Attack”… and then nothing…..

And of course, like last April 2017 (isn’t that funny?) we have to revisit the information about Tomahawk missiles, how much they cost and who is benefiting from their flagrant use:

Trump owns shares in company firing missiles into Syria, making $1.5b in one day for Raytheon

Tomahawk maker’s stock up after U.S. launch on Syria

Isn’t it funny how the Dates are exactly the SAME to the literal DAY of this years purported attacks?

If Raytheon made over $5 Billion dollars during last years response to a “chemical attack” with 59 missiles fired…. how much money will they make this year with over 100 Tomahawk missiles fired into Syria (that were taken down by 1950’s antique defenses?) this morning?  The truth will be seen, no doubt, next week when the Stock Markets open up again.

The unfolding story keeps changing and will keep changing as the “Talking Heads” have to come up with explanations and information to support their actions.  Multiple sources from WITHIN the American Government and Military, British and French Governments have openly stated that their ONLY information about this supposed “chemical attack” have come from THE MEDIA and sources like the “White Hats”- which have been proven over and over again to be faking information and evidence continuously to keep provoking the War Rhetoric. ….

…. This isn’t NEW.  This is an exact repeat of the exact same template that is continuously used to defend decisions by “Talking Heads” to take military action against sovereign nations.

DON’T FALL FOR THE BULLSHIT AGENDAS AND TEMPLATES!

And finally…. the big question is why hasn’t the US, UK and France bombed Turkey and Israel in retaliation to their purported chemical attacks this year? Why were these attacks literally instantly dismissed, even though there were multiple on scene reports, media reports and videos that proved that these attacks took place?  Perhaps because Turkey (even though Turkey has been attacking US supported, trained and armed Kurdish troops for months), and Israel are American and British allies?  Why is it that the crimes of these nations go completely unreported most of the time, and are brushed off as “didn’t happen” when the outcry becomes too deafening?