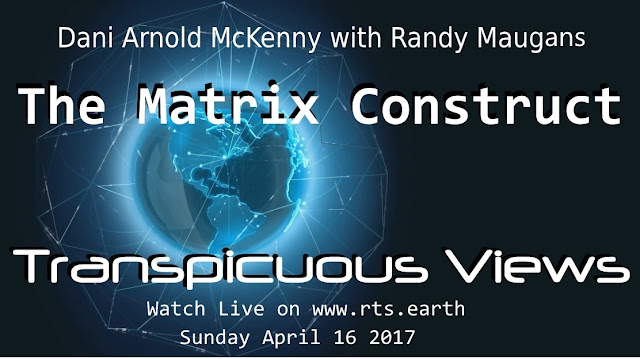 In This episode of Transpicuous View I have Randy Maugans, from Off Planet Radio with me to discuss “The Construct”.

We look through several theories from the idea of a computer simulation/hologram, to an actual physical construct, using the “Mandela Effect” (Toto Effect/ WTF Effect) as the benchmark, or physical “symptom”, if you will, that we are not in Kansas any more!!

As usual when Randy and I get together to talk, the conversation goes ALL over the place, reaching into a vast warren of rabbit holes that all tie back to the original topics.

Side note:  I will be launching the new website and community very soon! From now on, all the shows will be Live Streamed on www.rts.earth .  This site will also be the new Home of UnFuckers Unite!

My Notes about the Max Loughan and the DWaveTed Talk Videos:

Elon Musk asserts that we are almost certainly living in a computer
simulation- 1 in a billion chances that we are living in a “Base”
reality.Elon warns about AI…. Now partnering to create
trans humanist corporation to link our brains with computers.
Max Loughan explains Mandela Effect. Max begins discussing ME at around
the 5 minute mark.

D WAVE and CERN
Here are my thoughts in point form.
dwave- reaching through to parallel universes- pulling resources OUT OF
parallel dimensions human consciousness = resources- the ONLY true “resource”
Cern- leaking gravity INTO parallel universes

law of conservation of energy:
Energy can neither be created nor destroyed; rather, it transforms from one
form to another.
ie: you can’t take energy from one without balancing it by returning it
in equal measure
dwave pulls “resources”=human consciousness into this “universe”,
CERN “leaks” gravity out- balance of energy.
Could this be why the mandela effect is not a “cross the board”
occurrence? Why some people remember some MEs but not others? because
they (human consciousness) weren’t all “brought over”
(consciously) at the same time, but in multiple waves?Side thought: the floating back and forth through parallel dimensions that
I’ve hypothesized over the past few months. ie: family/friends
suddenly changing, and sometimes changing back later on, or changing
yet again to another different one. Are we getting passed back and
forth- the balance and counter balance as resources are passed
between dimensions?
CERN experiment December 2012- shut down CERN for over 3 years to
“rebuild”
CERN restarted in April 2015 with full restart in June 2015
(It is right around this time that we start discussing the Flat Earth
Theory and the Mandela Effect)
DWave launched 2013- yet we (many of us) have no knowledge of it till
summer 2016- Mandela Effect is suspected.
Quantum computers only “theory prior to summer 2016. (in my reality)
We followed the DWave news closely all of the end of 2016
Feb/march
sudden introduction of new computing methods- DNA computers-
synthetic DNA data storage, Atom data storage.
Early march, find flood of articles dates Sept 2016-Nov 2016 saying D Wave
doesn’t work, that quantum computers are too slow and don’t actually
work. Is this a Mandela Effect?
From Ted Talks on D Wave-with video time stamps
5:30
enormous number of parallel realities with different consistent
histories
6:08
all of those universes are as real as the things you remember
6:18
we can build machines that can be used to exploit these other
worlds… quantum computers are the most exciting of all of these
(infers there are other machines that ALSO can exploit these other
“worlds”)
9:27
quantum computers give us access to these new resources- parallel
realities
10:25
dwave/quantum computer to create intelligent machines- google /NASA
AI
11:00
approx dwave looks like black monolith…. contain refrigerator to
cool to almost absolute zero/0
12:22
pulse tube emits sound like a heart beat
12:30
feels like an alter to an alien god
14:25
nexus point where two parallel universe over lap- every QBit you add
doubles the amount of parallel universes that it has access to
14:45
2 to the 500th power of universes living in that chip
14:50
the shadows of these parallel worlds over lap with us, … the power
to dive into them to grab their resources and pull them back into
ours to make an effect in our world.
15:20
we’ve been doing this for some time now… number have been doubling
on this chip for the past 9 years(!)(since 2004 )
18:01
predictions

4 thoughts on “Transpicuous Views: The Matrix Construct, with Randy Maugans”