After all of the discussions we’ve had over the past couple of weeks, this article should definitely ring some bells… *ding *ding  *DING*  Something is definitely happening in our Magnetic fields when the talking heads make sure that this news is being covered on every main stream news site, in every country.

Earth’s north magnetic pole is moving fast and in an unexpected way, baffling scientists involved in tracking its motions….

In 2014, a new version of the WMM was released. This was due to last until 2020, but last September  (* Sept 2018- less than 4 months ago!) it had to be revised following feedback from users that “had become inaccurate in the Arctic region,” the BGS said.

Now, the WMM is set to be updated again.  (*has to updated for a second time in 4 months!) A meeting was due to be held on January 15, but because of the U.S. government shutdown, this has been postponed until January 30, Naturemagazine reports….

Researchers are now trying to work out why the magnetic field is changing so quickly. They are studying the geomagnetic pulses, like the one that disrupted the WMM in 2016, which could, Nature reports, be the result of “hydromagnetic” waves emanating from Earth’s core.

NOTE THIS:  No where and no one is anyone- ANYONE – talking about the SOUTH POLE. 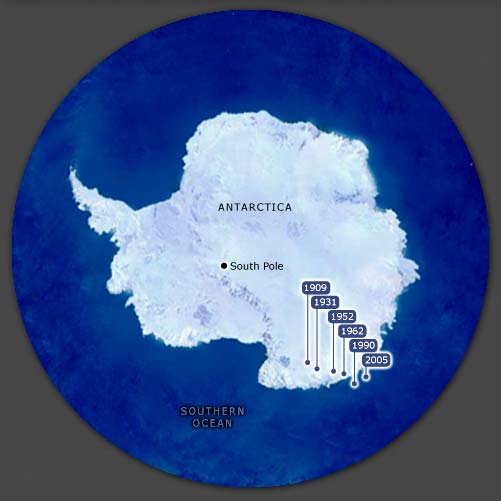 This is pretty much what you find when you search for information about the South Magnetic Pole and it’s movements:

The positions of magnetic north and south change as time passes, and scientists regularly record them. When the magnetic south pole was first located in 1909 it lay on the Antarctic continent, but it has been travelling 10–15 kilometres each year and by 2000 lay in the Southern Ocean.

Type into any browser search bar “South Magnetic Pole wander and movement” and you’ll come up with page after page of information…. about the North Pole.

I don’t know about you, but when “they” (the talking heads) talk non-stop about the North Pole, my immediate reaction is to ask “So wtf is happening at the opposite pole?!”

Another thing that should be noted about the very strange weather and geomagnetic disturbances we are having is what is currently taking place with the Polar Vortex.  The polar vortex is a large area of low pressure and cold air centered around both the north and south poles. It ALWAYS exists near the poles, but it becomes much stronger in winter.  Most winters in the northern hemisphere, the polar vortex will expand, sending cold air southward with the jet streams. Occasionally the Polar Vortex splits into two and will drive the cold Arctic air into North America AND Europe….

And just before New Years they announced that the Polar Vortex may drop down into Europe much earlier than usual this year- in early January (this usually happens at the end of January or early Feb.)- and that it may split into two separate vortices… 7 days later, the Polar Vortex split into 4 separate vortices with a 5th one perhaps still forming- I do not believe this has EVER happened before!

I’m not even going to get into the snow storms or freezing temperatures here in Europe!!
http://strangesounds.org/2019/01/mini-ice-age-underway-major-winter-storms-hit-countries-around-the-world-creating-snow-apocalypses-and-chaos-in-the-us-canada-mexico-iran-turquey-and-across-europe.html?fbclid=IwAR19zKxXeflhQtzgGhtpxQvO8yN4apZ-0MN3wIZPHGox7yWnLYOTo94FIE8

But take a look at Watchers.news to see some of the absolutely crazy storms and weather that has been taking place over this past few weeks!

I have been talking a LOT about the geomagnetics of our planet, over the past few weeks especially.  What I am posting below, is what I believe, is the physical evidence of these massive magnetic anomalies that we have been witnessing globally.

I mentioned this video last night during the UnFuckIt discussion- this youtuber has compile a huge amount of videos and photos of bizarre lights in the sky, flashes of colours, and “Transformers”  exploding. Her point: These are Plasma Discharges.  My point: These are happening due to the massive fluctuations in our magnetic field AND the bombardment that is currently coming in and slamming our magentosphere.

Here are a few more pictures and videos that have been sent to me in the past two days:

A powerful unseasonal storm swept through Kalegauk Island in Ye Township, Mon State Myanmar on January 8, 2019, causing damage to more than 300 of 500 homes.

Members of the state who traveled to the island to inspect the damage said the storm hit around 07:40 local time and lasted only about 15 minutes. However, the damage it caused was huge and locals said this is the first time they experienced such storm damage….

…”We first saw red [in the sky] near our village. Then it became dark and the storm hit our village,” Nai Taung Shein, chairman of Kalegauk Island told Mon Era News. “It only lasted 15 minutes but it destroyed a lot,” he added.

BOM spokeswoman said the cause of the Mars-like conditions were strong winds produced by a thunderstorm. …

CANCUN WATERSPOUT:A beautiful scene in Cancun, Mexico, on Tuesday as a well-defined waterspout developed at sunset. ??? ?: CreativeName4 on Twitter

from facebook: There were 2 mega lightning discharges here in South Africa last night that were not your normal big lightening bolts. They were of such magnitude of sound that nearby windows were rattled for 30 seconds solid with a sonic 20 hertz sound wave blast heard all over Joburg! A nearby viewer was so shocked by the first ‘blast’ that he stood by the window waiting to video … on the chance if there would be another. It occurred literally a minute later and he got the footage. I am no expert but the average plasma glow of a regular lightening bolt is approximately 1m wide. This image shows a plasma width close to 4m wide!

Friday Tabo, an official at the National Disaster Management Institute (INGC) in Niassa said 9 people were killed by lightning and 14 injured. This brings the total number of people killed by lightning in the same region since October 2018 to 30. The storm left more than 500 people homeless after their houses were either partially or totally destroyed.

And then there is the Earth’s Axial Tilt, which is another factor that very few people are talking about.

I highly recommend checking out this website, and it’s focus on the Earth’s Axial tilt and the fact that it’s changing.  I used them as a resource for tracking earth changes back in 2015, then after a massive computer crash I lost the bookmark for the site- I just refound it again this morning.  Note in the images below, that graphs out the changes to the planets “wobble” from 2013 right up to this week in 2019: And on the topic of Geomagnetic storms and anomalies and cosmic rays and radiation, one of our UnFuckers Jules posted this handy little infographic put out by NASA:

Major Shit is happening folks.  Please take the time to review some of the basics- being prepared is vital in my opinion at this moment.

1 thought on “Lights in the Sky… not a bird, plane or superman”