Recently I’ve returned to reading again, reading for pleasure, not research that is.  And yet every book I pick up seems to have some deeper meaning, with highlights of information that resonate deep within me.  I’ve just re-read all of David Eddings epic series, which I’ve read several times over the past 30 years, and over and over again, pieces jumped out at me.  Two nights ago I finish reading “The Redemption of Althalus” by Eddings (a stand alone novel) and was stunned at the amount of “information” it contained, about “time” “space” and the quantum entanglement of both within two battling story lines.

Last night I picked up, randomly (lol) The Mists of Avalon, which I haven’t read in over 15 years, and once again, it rang like a bell- so many pieces jumping out at me, to SEE them for the first time in the context of NOW.  So I wanted to share just a few of these opening pages with you all.

From the opening pages of the Mists of Avalon, by Marion Zimmer Bradley

For, as I say, the world itself has changed. There was a time when a traveller, if he had the will and
knew only a few of the secrets, could send his barge out into the Summer Sea and arrive not at
Glastonbury of the monks, but at the Holy Isle of Avalon for at that time the gates between the worlds
drifted within the mists, and were open, one to another, as the traveller thought and willed. For this is the
great secret, which was known to all educated men in our day: that by what men think, we create the
world around us, daily new.
And now the priests, thinking that this infringes upon the power of their God, who created the world
once and for all to be unchanging, have closed those doors (which were never doors, except in the minds
of men), and the pathway leads only to the priests’ Isle, which they have safeguarded with the sound of
their church bells, driving away all thoughts of another world lying in the darkness. Indeed, they say that
world, if it indeed exists, is the property of Satan, and the doorway to Hell, if not Hell itself…..

….”And that is why we came here,” said the Merlin suddenly, and his voice was like the tolling of a great
bell, so that Morgaine sat up suddenly and began to whimper in fright.
“I do not understand,” said Igraine, suddenly uneasy. “Surely the two lie close together … .”
“The two are one,” said the Merlin, sitting very erect, “but the followers of Christ have chosen to say,
not that they shall have no other Gods before their God, but that there is no other God save for their God;
that he alone made the world, that he rules it alone, that he alone made the stars and the whole of
creation.”
Igraine quickly made the holy sign against blasphemy.
“But that cannot be,” she insisted. “No single God can rule all things … and what of the Goddess? What
of the Mother … ?”
“They believe,” said Viviane, in her smooth low voice, “that there is no Goddess; for the principle of
woman, so they say, is the principle of all evil; through woman, so they say, Evil entered this world; there
is some fantastic Jewish tale about an apple and a snake.”
“The Goddess will punish them,” Igraine said, shaken. “And yet you married me to one of them?”
“We did not know that their blasphemy was so all-encompassing,”
Merlin said, “for there have been followers of other Gods in our time. But they respected the Gods of
others.”
“But what has this to do with the length of the road from Avalon?” asked Igraine.
“We come, then, to the reason for our visit,” said the Merlin, “for, as the Druids know, it is the belief of
mankind which shapes the world, and all of reality. Long ago, when the followers of Christ first came to
our isle, I knew that this was a powerful pivot in time, a moment to change the world.”
Morgause looked up at the old man, her eyes wide in awe.
“Are you so old, Venerable One?”
The Merlin smiled down at the girl and said, “Not in my own body. But I have read much in the great
hall which is not in this world, there the Record of All Things is written. And also, I was living then.
Those who are the Lords of this world permitted me to come back, but in another body of flesh.”
“These matters are too abstruse for the little one, Venerable Father,” Viviane said, gently rebuking him.
“She is not a priestess. What the Merlin means, little sister, is that he was living when the Christians first
came here, and that he chose, and was allowed, to reincarnate at once, to follow his work through. These
are Mysteries, which you need not try to understand. Father, go on.”
“I knew that this was one of those moments where the history of all mankind would be changed,” the
Merlin said. “The Christians seek to blot out all wisdom save their own; and in that strife they are
banishing from this world all forms of mystery save that which will fit into their religious faith. They have
pronounced it a heresy that men live more than one life -which every peasant knows to be true-”
“But if men do not believe in more than one life,” Igraine protested, shaken, “how will they avoid
despair?1 What just God would create some men wretched, and others happy and prosperous, if one life
were all that they could have?”
“I do not know,” said the Merlin. “Perhaps they wish men to despair at the harshness of fate, so that they
may come on their knees to the Christ who will take them to heaven. I do not know what the followers of
Christ believe, or what they hope for.” His eyes were closed for a moment, the lines of his face bitter.
“But whatever it is that they believe, the views they hold are altering this world; not only in the spirit, but
on the material plane. As they deny the world of the spirit, and the realms of Avalon, so those realms
cease to exist for them. They still exist, of course; but not in the same world with the world of the
followers of Christ. Avalon, the Holy Isle, is now no longer the same island as the Glastonbury where we
of the Old Faith once allowed the monks to build their chapel and their monastery. For our wisdom and
their wisdom-how much do you know of natural philosophy, Igraine?”
“Very little,” said the young woman, shaken, looking at the priestess and the great Druid. “I have never
been taught.”
“A pity,” said the Merlin, “for you must understand this, Igraine. I will try to make it simple for you.
Look you,” he said, and took the gold torque from his throat, then drew his dagger. “Can I put this bronze
and this gold into the same place, at once?”
She blinked and stared, not understanding. “No, of course not. They can be side by side, but not in the
same place unless you move one of them first.”

“And so it is with the Holy Isle,” said Merlin. “The priests swore an oath to us, four hundreds of years
ago, before even the Romans came here and tried to conquer, that they would never rise against us and
drive us forth with weapons; for we were here before them, and then they were suppliants, and weak. And
they have honored that oath-so much I must give to them. But in spirit, in their prayers, they have never
ceased to strive with us for their God to drive away our Gods, their wisdom to rule over our wisdom. In
our world, Igraine, there is room enough for many Gods and many Goddesses. But in the universe of the
Christians-how can I say this?-there is no room for our vision or our wisdom. In their world there is one
God alone; not only must he conquer over all Gods, he must make it as if there were no other Gods, had
never been any Gods but only false idols, the work of their Devil. So that, believing in him, all men may
be saved in this one life. This is what they believe. And as men believe, so their world goes. And so the
worlds which once were one are drifting apart…..

….Our world-ruled by the Goddess and the Horned
One, her consort, the world you know, the world of many truths-is being forced away from the mainstream
course of time. Even now, Igraine, if a traveller sets out with no guide for the Isle of Avalon, unless he
know the way very well, he cannot come there, but will find only the Isle of the Priests. To most men, our
world is now lost in the mists of the Summer Sea. Even before the Romans left us, this was beginning to
happen; now, as churches cover the whole of Britain, our world grows further and further away. That is
why it took us so long to come here; fewer and fewer of the cities and roads of the Old People remain for
our guide. The worlds still touch, still lie upon one another, close as lovers; but they are drifting apart,
and if they are not stopped, one day there will be two worlds, and none can come and go between the
two-“…

….A peace must come when these two lands can dwell side by side, a peace long
enough for the cross and the cauldron, too, to come to such a peace. If there is such a reign as this, Igraine,
even those who follow the cross will have the knowledge of the Mysteries to comfort them in their bleak
lives of suffering and sin, and their belief in one brief life to choose forever between Hell or Heaven for
all eternity. Otherwise, our world will fade into the mists, and there will be hundreds of years-thousands,
perhaps- where the Goddess and the Holy Mysteries will be forgotten by all man1kind except those few
who can come and go between the worlds. 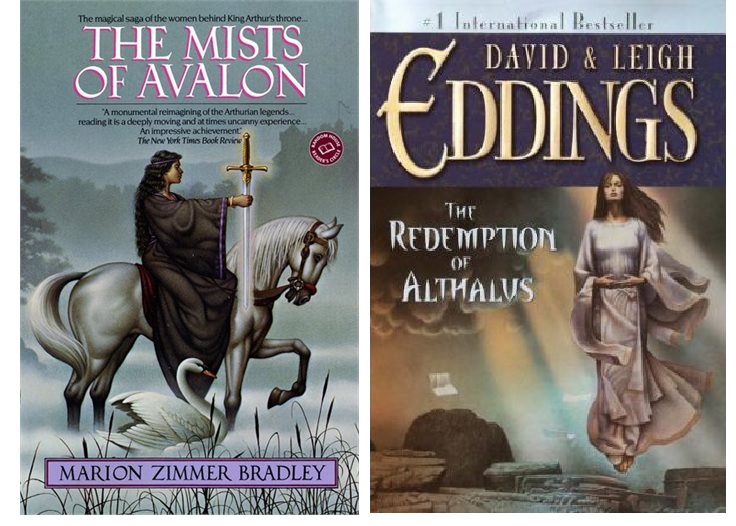