WOAH!!! This article from Feb. 23 2018 just blew my mind!!! The deeper meaning of this is unbelievable.  I have studied the Torah on and off for over 2 decades, and there is FAR more going on with this, than simply saying “Hey!  We really like the first 5 books of the bible!”

Pope Francis: the Torah is a manifestation of God’s love for man

“The Torah “manifests the paternal and visceral love of God, a love shown in words and concrete gestures, a love that becomes covenant,” the Pope said during the Feb. 23 audience, adding that the word covenant in itself “is resonant with associations that bring us together.””
….“God is the greatest and most faithful covenantal partner,” he said, noting that not only did God call Abraham to form a people that would become “a blessing for all peoples of the earth,” but he still desires world in which men and women “are bound to him and as a result live in harmony among themselves and with creation.”….
…The publication of the new edition of the Torah, he said, “is itself the fruit of a ‘covenant’ between persons of different nationalities, ages and religious confessions, who joined in this common effort.”

Let’s take a look at definition of the word “Covenant”:

And the Etymology of “Covenant”

indenture (v.)
1650s, “enter into a covenant;” 1670s, “bind by indenture,” from indenture (n.)
bond (adj.)
c. 1300, “in a state of a serf, unfree,” from bond (n.) “tenant, farmer holding land under a lord in return for customary service; a married bond as head of a household” (mid-13c.)
… From early 14c. as “an agreement or covenant;” from late 14c. as “a binding or uniting power or influence.” Legalistic sense “an instrument binding one to pay a sum to another” first recorded 1590s.
convention (n.)
early 15c., convencioun, “a formal agreement, covenant, treaty,” also “a formal meeting or convention” (of rulers, etc.), also “a private or secret agreement,”
Beelzebub
…Baal being originally a title, it was applied by the Hebrews to neighboring divinities based on their attributes; other examples include Baal-berith “the covenant lord,” god of the Shechemites; Baal-peor “lord of the opening,” a god of Moab and Midian.
Baal
late 14c., Biblical, from Late Latin Baal, Greek Baal, from Hebrew Ba’al, literally “owner, master, lord,” a title applied to any deity (including Jehovah; see Hosea ii.16),
warlock (n.)
Old English wærloga “traitor, liar, enemy, devil,” from wær “faith, fidelity; a compact, agreement, covenant,”
(Side note:  the original Hebrew word for “Covenant” is Berith:
Brith (or Berith, Brit, Bris)
1. the Jewish rite of circumcising a male child eight days after his birth.
The connotation, or deeper meaning of this is HUGE.  The cutting off of the Foreskin is the mark of bondage, and the enslavement of the male…. one that has far far deeper repercussions not only physically, but more importantly, emotionally and spiritually!

And of course there is the actual content of the Torah that is unbelievably horrific.  The Book of Deuteronomy alone is enough to base a series of horror movies on:

(Deuteronomy 1:41-44), and the destruction of Rephaim by the Ammonites with Yahweh’s help (2:21), along with similar other displacements.[43] Deuteronomy 2:31-37 records the complete extermination of the people ruled by Sihon king of Heshbon….
Deuteronomy 7 orders the complete annihilation of the indigenous inhabitants of Canaan, and God promises in exchange for obedience to bring diseases on the enemies of Israel
…Deuteronomy 13 insists that those who advocate the worship of other deities must be killed, and that a town that worships other deities must be entirely exterminated, including its livestock. Deuteronomy 14 forbids self-mutilation. Deuteronomy 17 punishes anyone who worships any deity or feature of the natural world with stoning to death, and likewise imposes the death penalty on anyone who disobeys the …Deuteronomy 20:10-15 – When you march up to attack a city, make its people an offer of peace. If they accept and open their gates, all the people in it shall be subject to forced labor and shall work for you. If they refuse to make peace and they engage you in battle, lay siege to that city. When the LORD your God delivers it into your hand, put to the sword all the men in it. As for the women, the children, the livestock and everything else in the city, you may take these as plunder for yourselves. And you may use the plunder the LORD your God gives you from your enemies. This is how you are to treat all the cities that are at a distance from you and do not belong to the nations nearby. judicial decision of a priest…

… Deuteronomy 21 commands the use of sacrifices to atone for blood in cases where a murderer cannot be identified, and mandates a month-long period of mourning before an Israelite warrior can have sexual relations with a female captive. It also mandates the stoning to death of rebellious children. Deuteronomy 22 orders the killing of women who cannot prove that they were virgins on their wedding night...It also mandates the death penalty for a man who has sexual relations with a betrothed virgin, and of the virgin if she does not cry out for help when raped …
And then of course, we have the issue of the “Noahide Laws“…. a set of laws enforced upon the “Gentiles” (non-Jews), regardless of whether they know of these laws or not. …. a set of laws that the vast majority of people have never heard of.  Now most people would scoff and say “who cares”… but you might find it interesting that in 1991 President Shrub signed the Noahide laws into US LAW:

“Whereas in tribute to this great spiritual leader, `the rebbe’, this, his
ninetieth year will be seen as one of `education and giving’, the year in
which we turn to education and charity to return the world to the moral and
ethical values contained in the Seven Noahide Laws; and
Whereas this will be reflected in an international scroll of honor signed by
the President of the United States and other heads of state”
Here are some interesting notes about this by former Congressman Bill Dannemeyer (ignore the religious rhetoric and just focus on the information, in my opinion)

Your U.S. government can now legally kill Christians for the “crime” of worshipping Jesus Christ!  A diabolic deception has been perpetrated on the American people by their OWN leaders, Senators and Congressmen, who have sold their soul to the devil.  On March 5, 1991, in the House of Representatives, and March 7, 1991, in the U.S. Senate, without any knowledge of, or input by, the people of the United States, U.S. Senators and Congressmen passed a law that is so outrageous – and frankly unconstitutional – that it forces the American people to be bound by a set ofmonstrous rules, called the Noahide Laws, rules that make the belief in Jesus Christ a crime punishable by decapitation by guillotine!  On March 20, 1991, President George H.W. Bush, a supposed Christian, signed the bill into law…

President Shrub wasn’t the only one to register “Noahide Laws” into official US Government recognition . Back in 1982, President Ronald Reagan penned a Proclamation, in which he states:

One shining example for people of all faiths of what education ought to be is that provided by the Lubavitch movement, headed by Rabbi Menachem Schneerson, a worldwide spiritual leader who will celebrate his 80th birthday on April 4, 1982. The Lubavitcher Rebbe’s work stands as a reminder that knowledge is an unworthy goal unless it is accompanied by moral and spiritual wisdom and understanding. He has provided a vivid example of the eternal validity of the Seven Noahide Laws, a moral code for all of us regardless of religious faith. May he go from strength to strength. 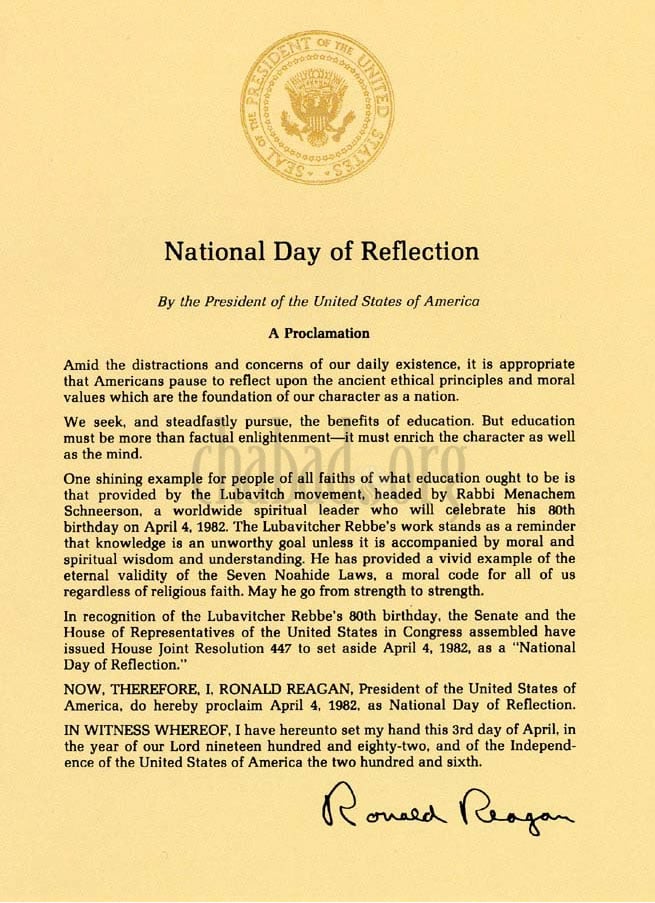 Now, what makes this all even MORE interesting (and pertinent) is that just a few months ago I was sent a copy of a treaty between Israel and the Vatican that was signed November 10, 1997:

…. And now the Pope is venerating the Torah, officially, reiterating that the “Covenant”  binds men and women to it, stating that the “new edition of the Torah “is itself the fruit of a ‘covenant’ between persons of different nationalities, ages and religious confessions, who joined in this common effort”.

This isn’t just about pretty words and gestures from a guy wearing a dress.  The Holy See Claims ownership of the entire planet and every man, woman and child upon it.

……….I’m pretty damn sure I didn’t sign this contract, and I do NOT consent to anyone representing me in any form or way through contracts that I have not put my wet ink signature. 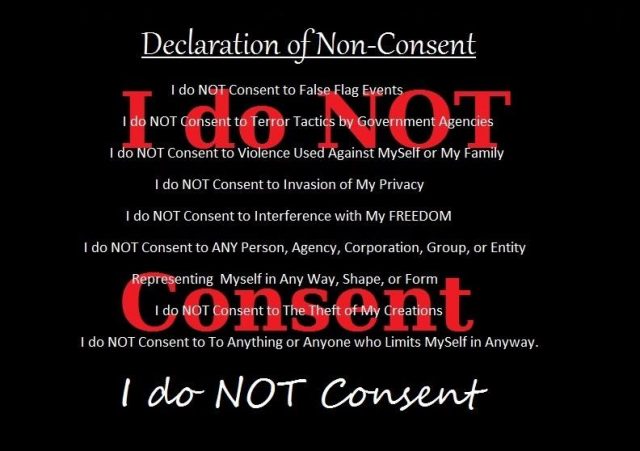