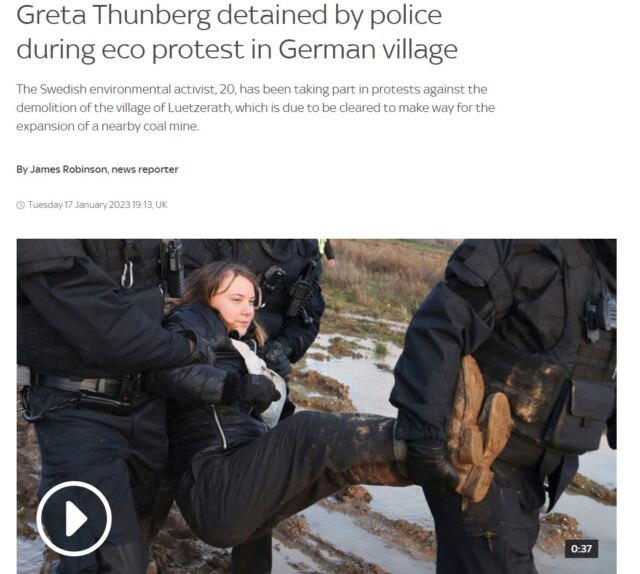 All of these “climate change”, and “Just stop Oil” “activists” arrests are ALL setup photo ops, all fake.

These “activists” who are “protesting” various things like “climate change” “oil” and other situations with various agendas,  have been promoted by the main stream media so that governments have an excuse to enact EXTREME dictatorial laws to take away YOUR freedoms.  Greta’s so called “arrest” in Germany is yet another example of the stage shows that are being spotlighted to bring in the most invasive laws imaginable.

The past few months has had the main stream media littered with “news” stories about activists gluing themselves to various ridiculous things, including roads and buildings, tossing tomato soup onto priceless paintings, and staging protests (yes, there is a very good reason why they use the word “staging” to describe these!) in places where they obviously have been ALLOWED to enter.  Anyone who’s aware of the insanity of what is being perpetuated globally, was capable of seeing through these charades to the underlying reason that they were not just being allowed to happen, but were actually being PLANNED in advance to push forward a very specific agenda:
New Laws to take away YOUR freedoms and your RIGHTS to protest…. to protest real things.
Above is the latest news about Greta being “detained” by police in Germany.  But here is a clip of what REALLY happened… the background of the set up, and making sure the camera’s have just the right angle…..
The mainstream narrative of Lockdowns, and “mass vaccinations”, food shortages and energy poverty (just to name a few of them) are falling apart and the people are getting mad.  No. The people are getting desperate, and with that desperation comes anger and fury that their families have and are suffering while the fat cats sit in ivory towers telling them to eat cake. 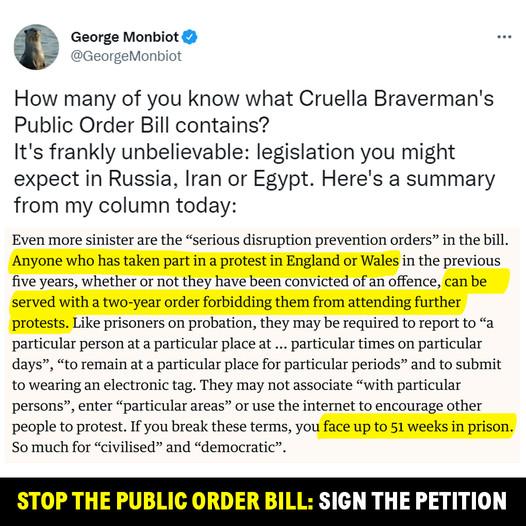 This winter has been VERY difficult for a lot of people, around the world.  …Winter is not really the best time for protesting, as it’s cold, wet, and all around nasty.  But governments everywhere are now passing laws in preparation for this coming spring, laws that will make legitimate protests illegal.  Laws that will not only take away your right to be heard, your right to protest the insanity that is growing around us, but also laws that will punish people for things they did BEFORE the laws were even in place.  In the UK, Sunak’s government is seeking to pass a bill that will arrest ANYONE WHO HAS TAKEN PART IN A PROTEST IN ENGLAND OR WALES IN THE PAST 5 YEARS.  And anyone associated with that person may be under scrutiny just through merely being friends with them.
….Heil Sunak.
And all of this has been brought to you by “protestors” actions of complete lunacy, that the media has just been ecstatic to tell you all about.
Fakery.  Complete, set up, pre-planned FAKERY

…. Average people aren’t allowed on runways, or near private jet terminals.  I dare anyone to try to just walk onto a runway at an international airport ANYWHERE, or to casually walk into a hanger where multimillion dollar jets are parked.  It doesn’t happen.  EVER.

Why did corporations ALLOW these so called “activists” to enter their property?  Why did security people ALLOW these idiots to have access to areas that they are not allowed into?

Money talks.  And the cameras are aways rollin’ to capture the latest “outrage” being committed by crazed “protestors”…. except when it’s REAL people protesting REAL problems.  Then suddenly the camera crews, and “journalists”, and the news vans are just no where to be seen.   And THAT should tell you everything you need to know about these fake activists and their promoters.