Further to our conversation about the Magnetic North Pole very rapidly moving across the Arctic, I commented in the UnFuckers group that in late 2017 a friend of mine, Ihor, had sent me a Russian science article that outlined that the magnetic north pole was no longer anywhere near where they are telling us it is, and that it was already nearing the coast of Siberia, Russia.  Ihor sent me this link just now, and has translated it into english for us:

Ihor: This one is (article) is from one day ago literally. Ukrainian publication, Around the World, a publication with reputation and over 100 years old 🙂

Now it is not in the Canadian Arctic, but on the Taimyr Peninsula.

The north magnetic pole of the Earth began to move so quickly that scientists decided to reissue maps for navigation systems ahead of schedule.

From the beginning of the 8th century, the north magnetic pole was located under the glaciers of Canada. From the end of the 20th century, he began to move towards the Taimyr Peninsula. In recent years, the shift has accelerated significantly.

The basis of all modern navigation (from systems of ships to Google Maps on smartphones) is the World magnetic model. However, the earth’s magnetic field is in constant motion. From time to time, scientists adjust the World model. The last such adjustment was made in 2015, and the next one was to be held in 2020.

However, geophysicists claim that the magnetic field is shifting so quickly that new maps need to be issued ahead of schedule.

“The error increases all the time,” argues Arnaud Schülle of NOAA. “At the beginning of 2018, during the regular evaluation of the World Magnetic Model, we found that the tilt specification changed in three years as it should have in five years. This happened under the influence of the global geomagnetic impulse of acceleration and the rapid displacement of the north magnetic pole of the Earth ”.

ESA satellites also tracked the changes. Scientists suggest that this shift is a harbinger of a quick pole shift. It is assumed that the magnetic poles of the Earth change places every 200,000 – 300,000 years.

However, according to scientists, 780,000 years have passed since the last such event, that is, the change of poles was significantly delayed. When castling the poles, the Earth’s protective magnetic field weakens, which makes the inhabitants of our planet vulnerable to the vagaries of space weather.

Recall NASA showed how the magnetic field protects the Earth from the solar wind.

Let me put this into perspective for everyone: 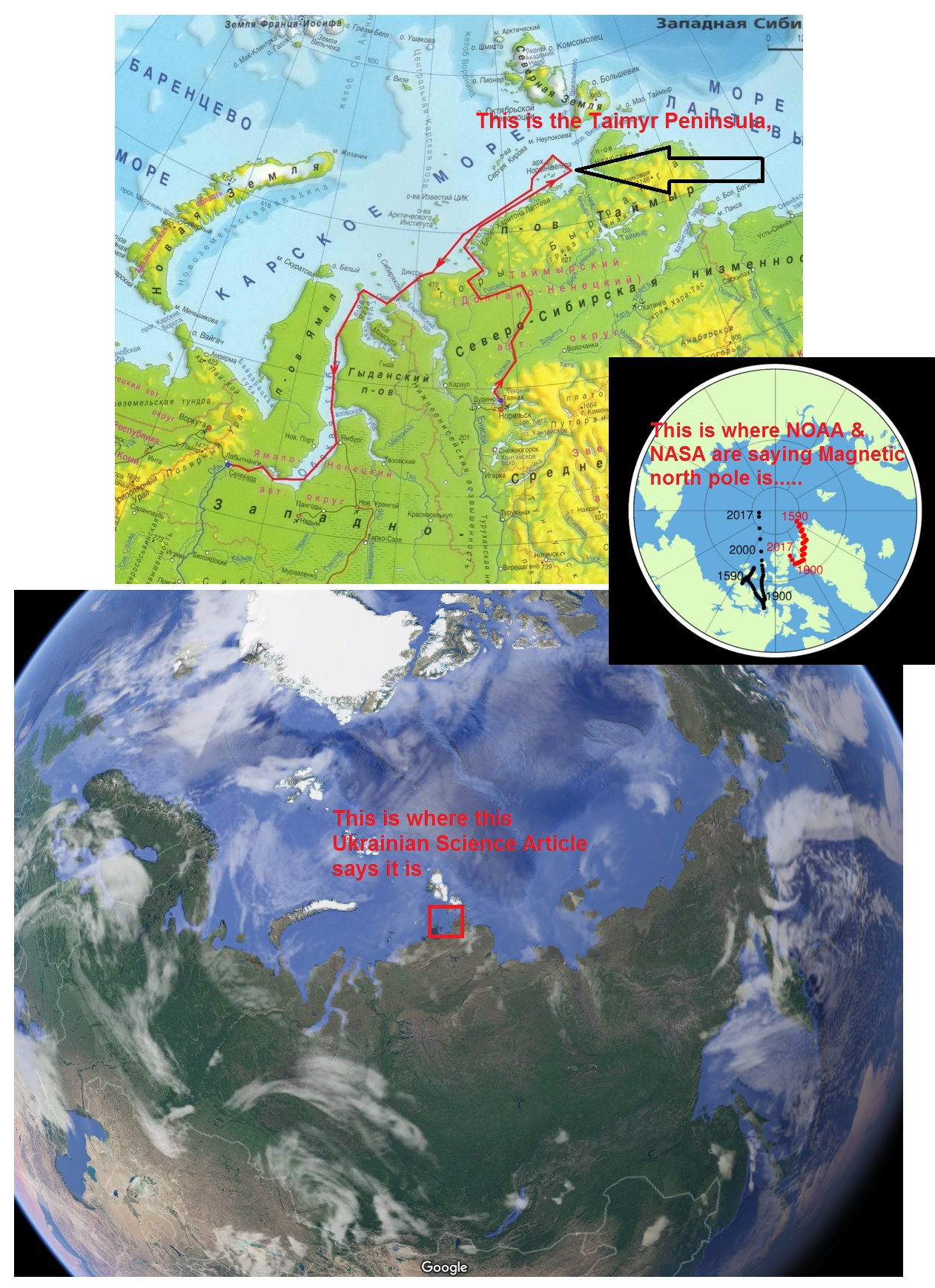 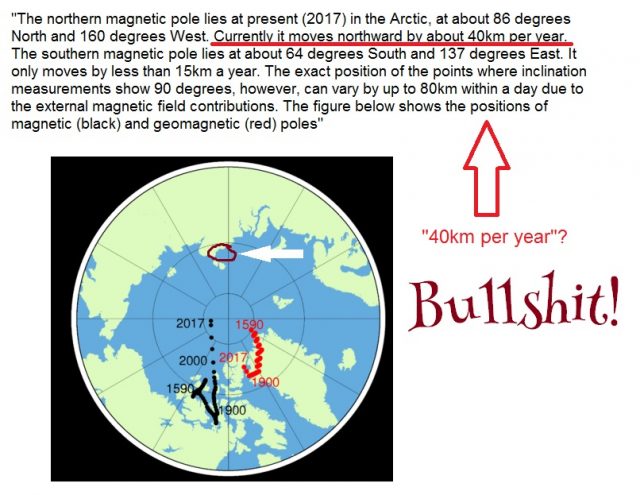 How do we know this is bullshit?  Elementary my dear Watson!  Logic says that if they set the magnetic maps in 2015, based on (we are told) 40km movement per year, we take the distance between the point shown at the year 2000 and the point shown at the year 2017.  We then measure that distance and divide it by 17 years to get an approximate average….. 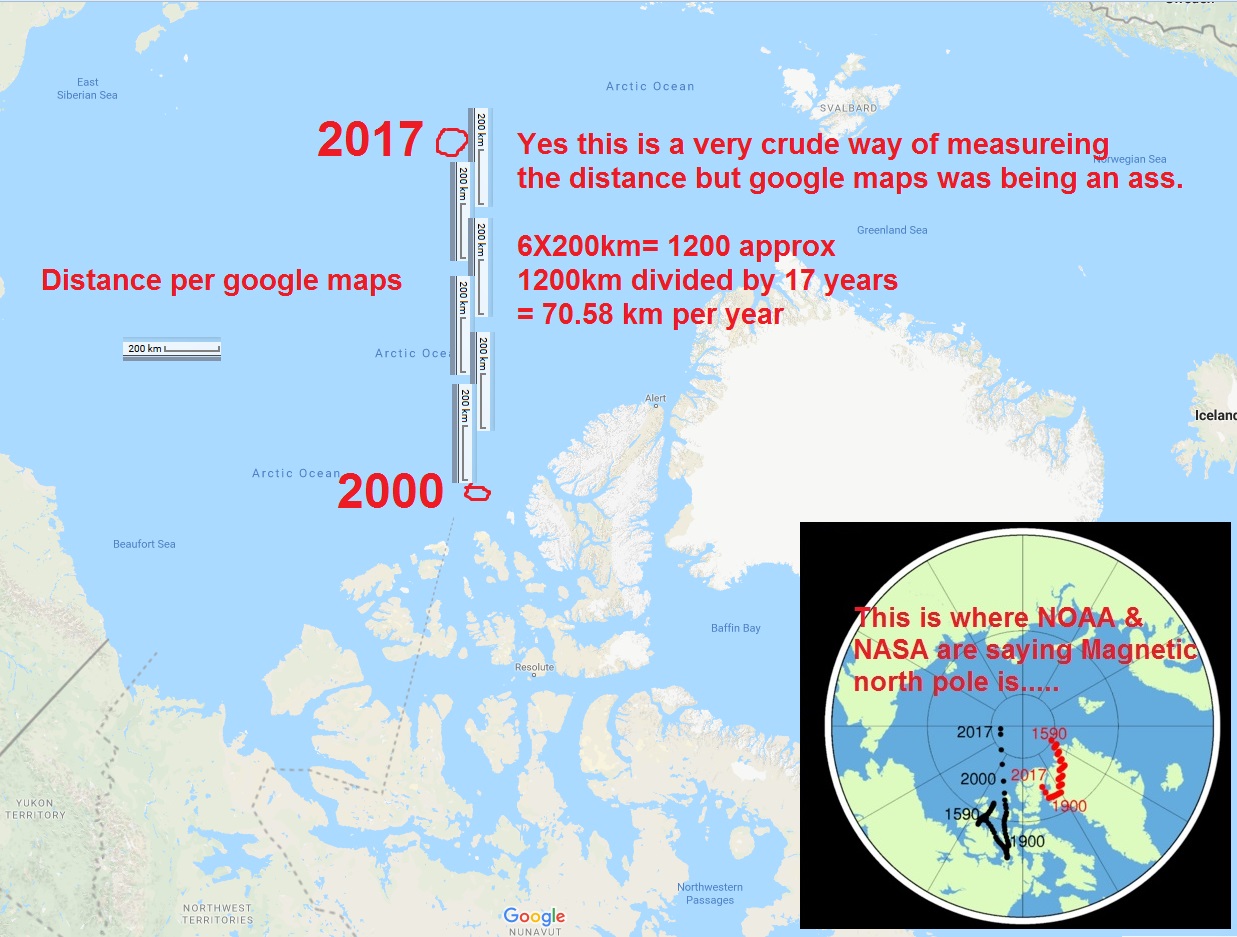 The major new this week (discussed in my Transpicuous News Show this morning here) is that the talking head agencies have had to call an emergency session because their Magnetic mapping algorithms  that they set up in 2015, which should have been accurate until 2020, have failed.  They already reset these magnetic “GPS” coordinates in Sept 2018 and 4 months later they are so off that they have to be reset AGAIN…..

…Which begs the question:  do we really believe where NOAA and NASA are telling us the magnetic north pole is?

Personally, I think I’ll take the word of the Ukrainians on this one!!  As I said in the beginning of this article, back in 2017, Russian’s had already said that the North Magnetic Pole was quickly approaching the coastline of Siberia.  Just sayin’.