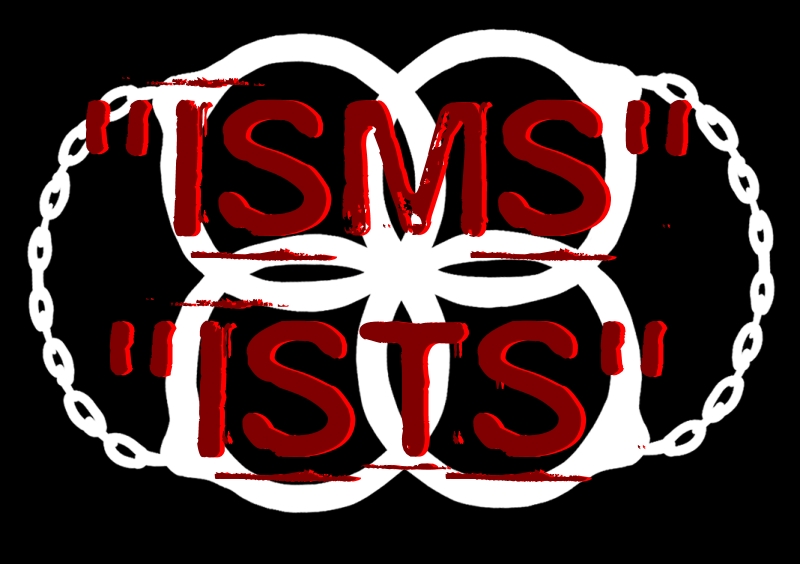 When we are trodding day after day through this quagmire of bullshit, lies and propaganda, sometimes its easy to fall into the trap of certain words.

Words, and English words in particular, have been warped and edited, with their true meanings hidden away in the shadows, while new definitions are polished and spin-doctored to prop up the propaganda and agendas.  Anyone who’s studied “legalese” knows this lesson very well.  Words are often used, yet their true meanings are swept to the side to make way for the new definitions.

A discussion on the topic of etymology and the original meanings of words would take up the space of an entire encyclopaedia, so l’m not going to bore you to death with that, lol.  But I want to point out the dangers of 2 sets of 3 letters that are very commonly added to the end of certain words: “ism” and “ist”.

When you hear a word with one of those endings, you can almost instantly look at the paragraph or article that contains it and analyze it’s true intention: division.  Oh it may not look that way at a first glance, usually there is a glossy coating of rhetoric and emotional stimuli that smooths over the actual  deeper guts of the message.  But when you look deeply at these “Isms” and “Ists”, you will most commonly see the division of the battle ground, two sides drawn up against each other, Fore and Against, With and Without, Good and Bad, Right and Wrong…. and of course the writer(s) will include a good dose of lyrical prose to insure that the readers roots for his side of the story. You’re either “for it” or “against it”. Pick a side.

But anyone who’s been at this game of digging down rabbit holes and try to find the answers of just what the fuck is actually going on in this asinine reality, should be well aware by now that both sides are controlled by the same people, with mostly the same intentions. The “war games” are just games to them, and the “isms” and “ists” are just pieces of propaganda to keep people arguing and permanently divided.  If the people can divide themselves into their own neat and tidy little groups, described with an “ism” or an “ists”, then they’ll continuously squabble about which “ism” and “ist” is better, which “ism” and “ist” is bad, and at no point will these groups realize that they are fighting over words that do not even mean what they think they mean, over words that are just creations to keep them all….

Take note of the “Isms” and “Ists” in the next few articles and news stories that you watch or read…. and remember that “they” control all the sides, all the “isms” and all the “ists” on a giant chessboard.

We need to stop being pawns.