Now doesn’t that just make you feel all warm and cozy all over?

Apple’s iPhone X sales woes have been extensively documented in recent days (most recently in “Doubts Grow At Apple” That A $1,000 Smartphone May Not Have Been A Winning Idea“), and with earnings by the world’s most valuable company scheduled for tomorrow after the close, many have asked just how Apple will avoid having its stock punished for what has been a disappointing quarter.  Adding fuel to the fire, Daniel Ives, an analyst at GBH Insights in New York, said Wall Street was in “full panic mode” about iPhone figures.

Well, it appears that Tim Cook has come up with a solution: according to The Times, the Apple CEO may unveil a mammoth $400bn cash return to shareholders “in an attempt to ease unrest over weak iPhone sales.”

Several analysts have predicted that Cook will hand shareholders $300bn to $400bn through dividends and a share buyback scheme over two to three years.

The very transparent part of this comes in the next paragraph:

“A huge buyback by Apple has been made likely by Donald Trump’s tax cuts, which will allow Apple to repatriate its $252bn foreign cash pile without paying a substantial capital gains tax bill;“

Doesn’t that make you feel extra warm and cozy all over?   I mean…. it must really make all you iPhone X buyers feel sooooo good to know that you paid a fortune for a phone (that according to most iPhoneX owners I’ve talked to, is NOT worth the money they paid for it), and yet all the Apple Shareholders will get an monetary apology for it, while you get absolutely nothing.

(…and if you live here in Malta and have to deal with the iPhone store, you’ll be lucky to get someone to even answer the phone, let alone actually help you if you have any problems with it!).

Just to make this very clear, here is what Deutsche Bank’s Jim Reid had to say:

“To put that number in perspective, a country with $400bn of annual output would slot it above Norway but just below Austria and in 28th in the world.” 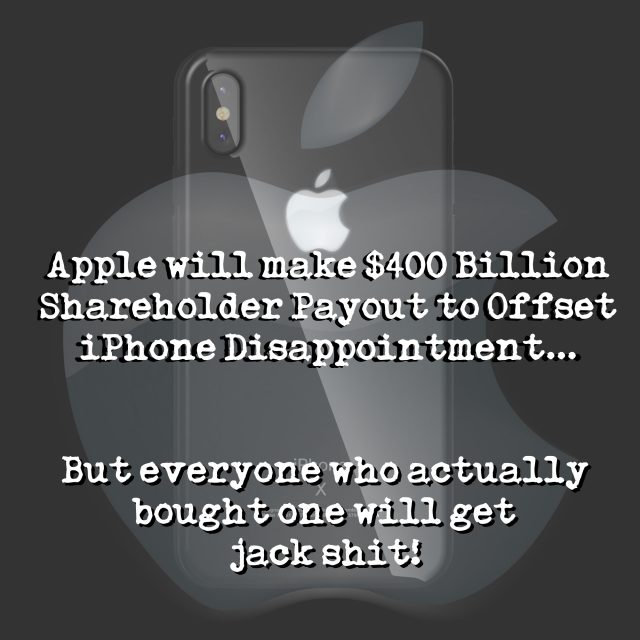